I posted this one two years ago... so here it is again, right in time for x-mas. Must be the most idiosyncratic versions ever done of Christmas Carols - gotta love it!

Her carols have also been released officially on ECM - the review by John Fordham in the Guardian is still out there - and I've gotten the CD in the meantime and enjoy it a lot! 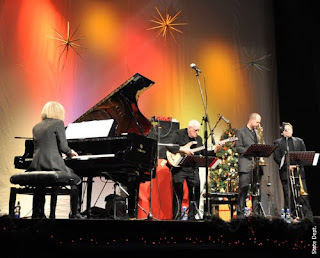 Yes, it's that time already again... I recommend you get June Christy's fine album This Time of Year if you want to hear something strong and personal. There's also Carla Bley's Carla's Christmas Carols (I'd be happy to bring back up the live recording I've shared of this - just put in a comment).

Those might be my favorites in the rare, very rare cases I want to hear Christmas music. I do have the Dylan disc and give it two or three spins I guess, but no Bing and Ol' Blue Eyes for me, please.

Marian McPartland's "Piano Jazz" show seems to be the longest-running radio show... and a wonderful one at that. Three albums of Christmas music have been released, but to my best of understanding, none of the music from the broadcast below has been officially released. Marian herself isn't part of the show, instead Bill Cosby is the host. There are several fine piano players involved, including the late Hilton Ruiz and the great Randy Weston, as well as Shirley Scott, Cedar Walton and younger players Michael Weiss and Cyrus Chestnut.

I've re-tracked this version (thanks go out to the kind dimer who put this out initially!), fixing some minor track-mark issues. As it is now, if you prefer to omit all the Cosby chatter (I for one most certainly do), you can just delete those tracks and the rest will be nicely programmed (a bit of talk remains, as Randy Weston introduces one of his tunes while playing piano underneath).

I hope you'll enjoy, and I wish those of who care a happy holiday season.

Source: radio, transfered from a defected cassette. I don't know of any good sources.
Sound: Tracks 1-4 B+/4-18 A.