I keep losing whatever I type - it really sucks. This is the third attempt to post this. Of course all the links and stuff is gone each time. And I keep getting too big spaces between paragraphs and other such things. Is blogger out with a beta version or what?

Anyway, back to the music. This is another seed departing from much of what I mostly shared so far, including hammond organ (remember my Dr Lonnie Smith post from earlier this year), played no less by the great Rhoda Scott. On tenor is Rick Margitza, who got an early start in the 80s with one of Miles Davis' last bands, then went on to produce a string of great albums under his own name, while also appearing with Maria Schneider's orchestra and more recently with the outfit Mourtin Reunion led by the French Moutin brothers. Leader of this trio is young French drummer Anne Paceo who got a carte blanche to put together a band of her choice.

On a sad note, this show - taken from dime and edited by yours truly - represents one of the last "Jazz Club" shows from France Musique. Claude Carrière and Jean Delmas have done this show since 1982 and it featured weekly two hour live shows, broadcast from clubs in Paris, but occasionally also from other places in France or neighbouring countries. It's very sad that they decided to end their programme (I don't know the reasons, I just heard the news). 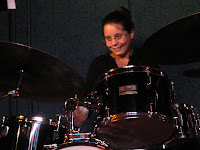 Here's another show by the Little Giant, one of my all-time tenor favourites. I shared a 1969 show of his here (in MP3 from lossless) a while ago, which should still be active, find it here and note that the correct date is May 16, NOT May 21:

Griffin still is around, though he likes a drink too much, it seems... I once had a chance to see him live, with the great Martial Solal and the late great NHOP. That was a notable and sad event at the same time, as Griff was tired and uninspired, Solal noodling away displaying way too much of his technique (which is of course brilliant and awesome, of course - but it ought to be but a means to do something else). One thing I fondly remember though is a terrific bass solo by NHOP during an earthy twelve bar blues - the highlight of a weird night.

Anyway, Griffin is in better form here, and even though the musicians with him might be unfamiliar to most of you, let me assure you they're great! The NDR Big Band is associated with German radio station NDR and has done a lot of astonishing projects. It consists of some of the best musicians currently active on the German scene. The same is true of Griff's partners on the small group tracks.

Here's a bit of a different thing... I saw the amazing Hariprasad Chaurasia in concert on Sunday. While I don't have any live recording of his handy to share here (I have one, but it would take me a while to prepare it, in case there's interest), this short radio broadcast with tabla player and percussionist Kuljit Bhamra popped up on dime. With him is tenor and soprano saxophonist Andy Sheppard, whom I know mostly from various great projects by Carla Bley.

They met up at this year's Bath festival, and a bit of that concert was broadcast on BBC (seems if lots of people write to them, sometimes they're willing to broadcast the missing parts of a concert at a later time, too).

Jeanne Lee & Ran Blake - a musical pairing made in heaven!

A short show has been shared on dime a few days ago, here it is for the non-dimers, and along with it, a big recommendation to check out this magic album of theirs: 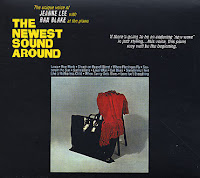 Here's a great show in very good sound quality, featuring that most nuanced of improvisers, Warne Marsh - definitely one of the most fascinating musicians ever! I just shared the links on another blog, hence I put them up here quickly and unprepared to comment much. Lou Levy, the pianist, can also be heard on Marsh's terrific Nessa album "All Music" (One Final Note review, Bagatellen review) which is available on CD with a bunch of bonus tracks (many of them alternates, but with an improviser such as Marsh, that's never boring).

Edits: deleted fm talk, fixed marks/deleted gaps, move mark CD1#2/3 (-0.5sec)
Note: most applause was cut out, at the end of some tracks I cut out some tiny bits to omit all of it, when no music would be hurt by that.

Here's another show I grabbed from dime, quite some time ago. I edited it a couple of weeks back and thought this might find a bit of a bigger audience if I spread it in the blogosphere. I hope you'll enjoy it!

This is again in FLAC format, as will be a pair of other shows I already upped on rapidshare.

This is the first supplement (at least one more to come) to my South Africal posts. Alan Skidmore, the sax player known from S.O.S. and other projects, was the first British jazz musician to visit post-Apartheid South Africa in the nineties. This led to the 1999 album "The Call", with Amampondo, a Cape Town group of drummers. Skidmore's Ubizo project continues in the same vein. "Ubizo" means "the calling" (as in "vocation") and adds German trumpet player Ingolf Burkhardt to the mix. They released an album in 2003 and were touring again in recent years. This is a long and fine recording I got from dime recently and find worthy to spread further, beyond the dime community.

Here's another show I grabbed from dime and fixed track marks etc. This is the most recent addition to my collection of May 1981 Pepper shows (note that the May 14, 1981 Croydon show is available in the series of previously unreleased Pepper recordings that his widow Laurie is releasing - buy them at CDBaby).

Art Pepper is one of the truly astonishing artists in jazz history, a man who was searching all his life, and who on his path found beauty (and horror, too, I assume). Go and buy any and all of his Contemporary and Galaxy albums as long as they're still around (Concord isn't doing much good to the Fantasy catalogue, as expected... and there's no one - like RVG or OK who take care of Prestige and Riverside reissues - to take care of the Contemporary or Galaxy material) 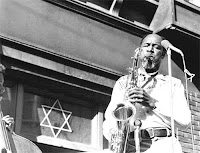 Here's what I consider a treat: a boot by Buddy Collette (website, wiki, AMG), one of the great reedmen of what's usualy dubbed West Coast Jazz. Collette is black, and on tenor he could sound quite like that, too - a musician far above the etheric thin cliché of how West Coast sax players were to sound. He was very prolific as a doubler, not only using alto, tenor and clarinet, but also playing some fine flute. Collette recorded with everyone on the West Coast, but on me, he made his mark as a member of the great original Chico Hamilton Quintet. There were three Original Jazz Classics discs reissued by Fantasy, originally on Contemporary, all of which are likely gone for a while (at least until Fresh Sound or Lone Hill will come around reissuing them), of which I managed to get hold of the fine "Nice Day". Fresh Sound has two volumes available of more 50s sessions, "Tasty Dish" and "Soft Touch" (my own discs have faulty covers - you need both to have all of the music AND the fitting info...)
Collette's story in the 40s included involvment with Charles Mingus - check out the fantastic Uptown Baron Mingus disc, including all of Mingus' 40s West Coast recordings plus a huge, incredibly informative booklet (and don't fall for the Definitive boot in this case! It's really worth getting hold of the original, even if that means you'll have to pay a bit more!)
So quite logically, Collette turns up in Mingus' fascinating "Beneath the Underdog", which focuses mainly on his early years. In addition to that, he wrote his own book, "Jazz Generations: A Life in American Music and Society", which a friend sent me quite some time ago and which I should have read ever since... anyway, it's available for almost nothing on Amazon marketplace. (Mingus' book is up cheap from Amazon itself, check here.)
If you're looking for the best of Chico Hamilton's quintet (the later edition with Paul Horn was still fine, but Collette is my favourite... also you get Jim Hall, who was later replaced by John Pisano), there are two discs available from the Spaniards: studio & live. In addition to that, Blue Note unearthed "The Original Ellington Suite", which was not available when Mosaic put together their Chico Hamilton box. It's another highlight from Hamilton's output and it's still available. That one though is with Eric Dolphy in place - the final version of the Ellington Suite, included in the Mosaic box and to my knowledge not available since, reunited the original Hamilton quintet, with Buddy Collette doing a great job.

Anyway, now on to the music... sound quality isn't perfect here, in fact it's far from. But I consider it listenable to say the least. I got this from dime but did some fixing (mainly correcting marks, I didn't alter the sound in any way). Also I'm not sure the drummer that was given with the dime seed is correct. There are two band intros, the name I could possibly make out is Gianpiero Prins. If anyone who downloads this could confirm, I would be very grateful!
Correction: It's Giampiero Prina - thanks a lot for the help, Giovanni!