Dizzy Gillespie - At the Spotlite 1946 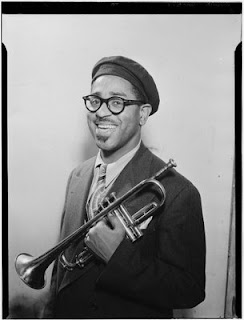 This came out in 2008 on Uptown in what I guess is the definitive version, compiling the whole shebang. Before, the same music (in slightly different sequence) was contained on the Dizzy Gillespie series of the great French "Masters of Jazz" releases (Volumes 7 & 8, a 2CD set that also contained the "Jivin' in Bebop" soundtrack).
The Uptown set can (and SHOULD!) be obtained easily, for instance from Amazon or cdUniverse.

Dizzy Gillespie is heard leading his big band in a series of live performances during the summer of 1946, recorded by the legendary Jerry Newman, a fan who made historic transcription discs of many groups during the era. Unlike many of the commercial issues that have appeared over the years, Uptown was able to obtain the original discs from Newman's family, so with skilled restoration, the audio is quite impressive throughout this two-CD set.

The fidelity is especially great for the horns and reeds, while the rhythm section isn't completely buried as on many such sessions. Some of the highlights include a sizzling take of "Our Delight" featuring the leader and tenorist James Moody, vibraphonist Milt Jackson in "The Man I Love," Thelonious Monk's "'Round Midnight" with its composer at the piano and Jackson, several takes of Gillespie's modern "Things to Come," plus a guest appearance by vocalist Sarah Vaughan in what is billed as an intermission feature of "Don't Blame Me," with tenorist Eddie "Lockjaw" Davis chiming in. Ira Gitler's detailed liner notes and the wide variety of vintage photos add to the value of this essential release for Dizzy Gillespie's fans. 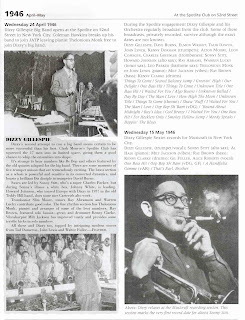 Thanks for the post! What other releases would you recommend from his early big band?

Tim, the must haves, I guess, are the RCA and Savoy sessions (in addition to the Spotlite dates on the Uptown 2CD set, of which this post gives you a taste).

The Savoy set closes with some later sessions, from Dizzy's rather dull period (I guess that was roughly 1951-55 or so, he picked up steam again when Norman Granz started recording him extensively in the mid 50s...), where you can hear a young John Coltrane on one date. Kenny Burrell also turns up, and you'll get a strings date, too.
On the RCA, you get one of those Metronome All Stars sessions (featuring Fats Navarro, Miles and many others, along with Dizzy).

I love the Uptown CD of this material. In fact, I love ALL Uptown CDs! And your blog...
thanks.

Thanks a lot. I Looked for this one since decades.