The joy and pain of South African Jazz

On an afternoon in summer, the farm Quaggasfontein in the Great Karoo. About 200 years ago, after 13 years of work, two slaves are said to have completed the building of this wall which surrounds the farmyard.
Near Graaff-Reinet, Eastern Cape. December 1966

I realized that the Megaupload way of getting the four files I compiled some time back when doing a blindfold test on the Organissimo board was still working - here are the links:

[links removed, go to this new post to find the new links, eventually - and stop bitchin' around!]

A new shack under construction, Lenasia Extension 9, Gauteng
5 May 1990

Allow me to repeat myself - in case not everyone clicks on the above links, here's some of the info I posted back then:

Graves of the Griquas.
...The Griquas were coloured men and women. They were descendants of early Afrikaner frontiersmen; of the remnants of Khoisan tribes, hunters, gatherers, and pastoralists; of escaped slaves from the wine and wheat farms of the south-west Cape; of Free Blacks from the colony who could find no acceptable place for themselves in it; and of African tribesmen, detached from their tribes by war or by choice. They formed a community which attempted to discover what their role in South Africa was, or if there was none, to create one for themselves. In the end they could not do this ... (Adam Kok's Griquas: A Study in the Development of Stratification in South Africa, by Robert John Ross, Cambridge 1976)
Philippolis, Free State, 27 August 1986 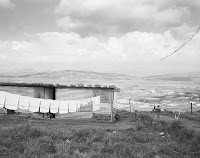 Kite-flying, near Phuthaditjhaba, in the Qwa Qwa bantustan, now the Free State.
1 May 1989

Shopping on 14th Street, Pageview, Johannesburg. The suburbs Pageview, which was mainly Indian, and Vrededorp, which was mainly Afrikaner working-class, were next to each other. The Vrededorpers did much of their shopping in Pageview (as did people from many other parts of the city). When the Group Areas Act was enforced in 1977, the Indian population of Pageview was forcibly removed, and their shops and homes were destroyed to make way for Whites.
Pageview, Johannesburg, Gauteng. July 1985

Harry Miller (1941-1983)
Detailed info on “The Collection”: http://www.efi.group.shef.ac.uk/labels/ogun/ogunhm.html
(Don't by all accounts miss the Isipingo disc released on Cuneiform! It's the best way to get acquainted with Miller these days, as the Ogun box has been out of print for a while now...)

*) albums I don’t own in any form (some of this stuff has been around in the blogosphere…)
**) albums that are not actually “South African jazz,” whatever that is

Further metion: Golden Afrique Vol. 3 (Network), dedicated to the music of South Africa, Zimbabwe and Sambia (Volumes 1 & 2 are highly recommended, too - for Europeans, I assume the best place to get them is here: http://www.zweitausendeins.de/suche/?ArticleFocus=3&ord=-1&alpha=1&cat=20&q=golden%20afrique). These aren't jazz releases, of course, but they contain plenty of wonderful music attractive to the jazz audience, too...

And to end things, here's the sleeve of the original King Kong album - the musical which in its cast included many of the luminaries of South African jazz:

Note that the links for files 2 and 3 (or part 2 of disc 1 and part 1 of disc 2) are in wrong order - not that it matters if you grab all of it... don't feel like editing this mother of a post again, after I had to re-do it already...

Hope there'll be some bits of discussion in here, about all this beautiful music!

Flurin, this is an AMAZING post! I missed your BFT completely on the Big O board - here's my second chance.

I know little of South African Jazz, but from what I've heard so far - it's a rich mine that has to be digged.

BoB is one of my favorite modern Orchestras and I love Dudu Pukwana's music as well as M'Bizo's.

I look forward to listen to this collection and read thru the links you've provided.

Good to see you here, Barak! Enjoy the trip!

Oh, and some of the links have changed or gone no good, I didn't have time to double check them all... will likely post some fixed ones in a new post later.

Thanks for this awesome post! I have been enjoying this music almost obsessively for some time now (Kwela by Gwigwi Mrwebe is a particular favorite) and am looking forward to listening to all of this. I have had some trouble d/l the blindfold test files, though, as part 2 is the only one that is found at any of the hosts.

All the links are working if you choose the Megaupload option - I just tried myself (again). Makes me kind of grumpy that mostly people just comment if they can't get the free music - and are too lazy to even try - or to read the main post, where I already said the Megaupload options of all files were still good... I did of course check that myself, before posting the links!

You're right, please forgive my lazy mistake. Thanks again for all the work in compiling this.

Yeah, ok... I'm usually not such a grumpy person, but as I was preparing to react in a "don't shoot the messenger" mode and then realized that the links were still ok, I was a bit annoyed... sorry for that.
Now enjoy the music!

I'm slightly embarrased to promote my own link for an Abdullah Ibrahim web site that has not been updated for 5 years. Still, it was a labor of love for my friend and it does come from and reaches for a personal point of contact.

Incidentally, the Khoi Khoi and San cultures may have sustained an African musical culture for upwards of 100,000+ years. A tidbit worth knowing if anybody ever asks you when jazz was begun.

please check the links again they don't seem to be working

I'll probably embarass myself, but I can't find the links to the music. Must be something wrong with my eyesight, or perhaps the brain's going alltogether, but all I see are links to the organissimo discussion forum, where the initial comment mentions download links but doesn't say where they are.

By the way, I do own a vinyl copy of Witchdoctor's Son by Johnny Dyani. I'll see if I can find somebody here in Brazil who'll help me put it up on the net.

Wow. What a comprehensive post. Interesting. Speaking of South African jazz you will probably find this to your taste:

@gato: read the post, there it says all you need to know about the links...
Also there's no need to upload the Dyani - it's readily available on CD!

@ish: good to see you on my place! I found out about your two blogs a couple of weeks ago and loved many of those Strata East shares (your own and those you link to - great service)!
I've not come around downloading that other thingie yet, but I will!

I have to second the comments of John B from the Organissimo board: disc 2 #7 BoB's "New Year Carnival" is outstanding, really joyous and raucous ensemble playing. Wow! Thank you for sharing that in particular.

[links removed, go to this new post to find the new links, eventually - and stop bitchin' around!]

sorry but the new post link didn't lead me to the "JAZZ SOUTH AFRICA" compilation, and i aint more bitchin' than you do, bitch :)
i always enjoy the music, that's why i was seduced by the idea of listening to your compilation but despite my efforts i will obviously never

Anyway, subscribing to RSS-feeds is the easiest way to omit such confusion as you'd have all the new posts right there in your own personal feeds-inbox and you can search them, too! (not for links, as those are mostly in the comments or disguised, but for "south africa", for instance)